Or —  How the Holy Spirit Led Peter and Paul
to Conquer the Eastern Roman Empire for Christ.
The Revised Common Lectionary calls the churches to read Acts instead of the Old Testament during Easter season of each year.  This is the season of the Witnesses to the Resurrection.

Thus the First Readings for seven consecutive Sundays (as well as on Ascension Day) are from Acts 1-2, 7, 10, and 17 (and other chapters in other years).  (Acts has 28 chapters.)  These are only little samplers and do not give us the full sweep of this amazing and unique composition of the early Christian movement.  Thus I offer this overview of the complete work called in our Bibles, The Acts of the Apostles. 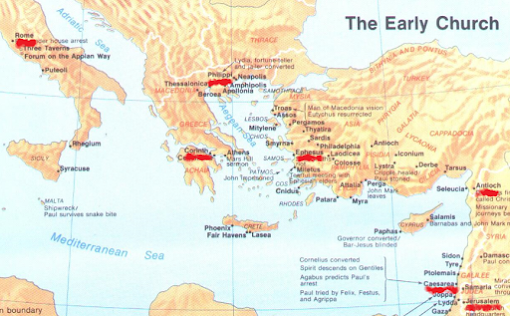 [A note on terminology.  The words “Jew,” “Jews,” and “Jewish” are avoided here when the subject is the people referred to in the New Testament.  These words are later translations into European languages of the Greek word ’Ioudaíos, which, more literally translated, is “Judean” and “Judeans.”  This is a respectful reminder that there are no “Jews” in the New Testament; only “Judeans” and peoples of the nations (“gentiles”).]

(Reference:  B.M. Newman and E.A. Nida, A Handbook on The Acts of the Apostles, United Bible Societies, 1972, pp. 2-3.  The original source, widely used in the 20th century, was C.H. Turner, “Acts,” in Dictionary of the Bible, Scribner’s, 1900, Vol. I. )
Key to this approach:  There is a series of summary statements throughout the book that mark the conclusion of each of six stages in the spread of the Word from Jerusalem to Rome.  [Section titles are from Newman and Nida, occasionally modified by JW.]
The Word preached by Peter in , 1:1-6:7
Acts 6:7  “The word of God continued to spread; the number of the disciples increased greatly in , and a great many of the priests became obedient to the faith.”


The Word preached by Greek Judeans in , , and , 6:8-9:31
Acts   “Meanwhile the church throughout , , and had peace and was built up.  Living in the fear of the Lord and in the comfort of the Holy Spirit, it increased in numbers.”
The Word preached to the Nations (Gentiles) from to ,
Acts   “But the word of God continued to advance and gain adherents.”


The Word, rejected by Judeans, is accepted by the Nations, confirmed by leaders, 13:1-16:5
Acts 16:5  “So the churches were strengthened in the faith and increased in numbers daily.”


Paul, rejected by Judeans, witnesses in Jerusalem, Caesarea, and Rome, -28:31
Acts 28:30-31  “He lived there [in ] two whole years …31proclaiming the kingdom of God and teaching about the Lord Jesus Christ with all boldness and without hindrance.”

The Origin and Character of Acts.

[Later addition, Sept. 2020:  In the mid-to-late twentieth century, the French Roman Catholic scholars, Pierre Benoit and M.-E. Boismard and A. Lamouille produced massive studies of supposed "sources" of Acts.  These are discussed and to some extent followed by Joseph Fitzmyer in The Acts of the Apostles, (Anchor-Yale Bible, 1998) pp. 80-89.  Fitzmyer lists every passage in Acts, giving its origin as Luke's composition or some other "source," pp.85-88.  All this after opening his discussion of "sources" in Acts by saying, "Nowhere in Acts does the author say or even hint at sources that he might have used...", p. 80.]

Informants is another matter.  If we follow the “we passages,” Luke was around Paul’s churches in for some years, probably after Paul’s death as well as earlier.  He would have gathered names and incidents from people in those other churches which he used in his narratives.
Luke was also with Paul for two years in in (when Paul was under house arrest in the Judean capital city).  During those two years in they were acquainted with Philip the Evangelist, who had four daughters who were “prophetesses,” that is, who had charismatic gifts (21:8-9).
Many scholars have recognized that the people in were probably main informants for Luke’s work, not only in Acts but also for the Gospel.  (One may think of Philip’s daughters as informants about the virgin Mary and the infancy of Jesus, as these stories were retailed in .)  was probably Luke’s main source of stories about the beginnings in .  (The dominant language in was Greek; in it was Aramaic.)
(Acts is NOT an accurate story of .  James the brother of Jesus had brought the family to and had become the authoritative head of the assembly.  Luke ignores the James-the-Brother story, which would have been ’s main story after about 44 CE.  Luke follows the Caesarean story, in which Peter is the major figure, delivering the main speeches, escaping miraculously from prison, and receiving direct instructions from God (for Caesarea!) to cross the boundary between Judean and non-Judean people accepted by God.)
8.  Historicity.  (This is a silly term, but it is short-hand for “Is the history true?” )
Modern commentators labor this issue, in general and in individual episodes, endlessly.  Conservative Christians believe most of it is defensible; critical scholars know a lot of it is legend and retails what early believers wanted to believe.  Acts is unique, in a class by itself, unlike the Gospels.  Mostly the only criteria for “true or false” are internal consistency, consistency with other New Testament writings, data about Roman provinces at the time, and what modern persons believe is possible or probable.
I have been reading critical scholars about Acts since my senior year in college (1955) and have labored over pretty much every approach to the writing.  Again, without laboring the point, I long ago came to the following general view:
Chapters 1-5 are fiction (from Caesarean piety about the church).
Chapters 6-12 are legend (real people, fabulous activities).
Chapters 13-15 are tradition (mainly ’s story, Barnabas and Paul).
Chapters 16-28 are historical writing (ancient style; Paul as Luke knew him).
9.  Conclusion about Luke.
I think Luke was a significant but modest figure in the Paul churches in the two decades or so after Paul’s death in (probably 64 CE).  Over the years he became a recognized source (a Reciter) for the Jesus story and continued conversant with the churches of , , and the western coast of .  As the second generation of the Movement advanced and written Gospels began to appear, he included what was circulating from other locales (Mark and Q) in his recitations among the churches, added to it lots of Jesus lore he had collected from informants, and produced a really amazing composition, the Gospel according to Luke.
By that time – well after the destruction of Jerusalem in the Roman war of 66-73 CE – informed observers could see that (1) the return of Jesus in power would not happen until the Movement had incorporated, by God’s command, many non-Judean people, and (2) the Movement was taking on a significance of its own across many provinces of the Roman empire.  A very work of God in the world, after Jesus, was going on.
With the sponsorship of a well-to-do and sympathetic figure (Theophilus) Luke proceeded to relate with great skill and generosity all the local lore and personal history he knew about that Movement – and gave us (and Theophilus) the Acts of the Apostles.
Posted by DrJay66 at 11:26 AM