Because Easter moves around – sometimes early, sometimes late – in our civil calendar, the Lectionary readings “after Pentecost” have to be adjusted.  (If Easter is late, there are fewer Sundays “after Pentecost.”)  What was the Gospel reading for the 2nd Sunday after Pentecost in 2018 was omitted entirely in 2021, when Easter was a little late.
The Gospel reading omitted in 2021 was Mark 2:23-3:6, two controversy stories about Jesus as Lord of the Sabbath.  I think this reading is interesting enough to make a separate posting in this Bible Studies blog.
Mark -3:6.

This reading is two “conflict” episodes in which Jesus answers charges that he is violating the Sabbath commandment.  I believe that the usual treatments of these episodes have seriously trivialized what are in fact profound affirmations of the Jesus movement.  Thus, the following comments are not very standard commentary material.

The Context.  Scholars have long recognized that Mark 2:1-3:6 is a collection of five “conflict stories,” which presents the opposition of the Judean leaders to Jesus’ message and mission.  The scribes and the Pharisees indict Jesus for not observing the Law as they teach it, which means they deny who he really is, “the Son of Man.”

Read as they stand (without theories about editorial changes) these passages present four ways the Jesus people differ from the Pharisees.

I will attend more closely to the Sabbath controversy episodes.

While walking through the grain fields, Jesus’ disciples pull off a few heads of grain and eat them.  The Pharisees say, “That’s unlawful on the sabbath!”

Commentators take us into details about when that is and is not a violation of sabbath rules as interpreted in Biblical and Rabbinic texts.  Very few cry out, “What a ridiculously trivial little issue is this!!”  To be an actual violation you have to pull off enough grain to qualify as “reaping”!  Does our text even vaguely entertain that kind of question?  No.

The main point, of course, is Jesus’ reply.

Without any obvious connection with the sabbath, he refers them to an episode in the story of David.  David once entered the sanctuary of the Lord and took the most holy bread because he and his men were hungry.  The episode is in I Samuel 21:1-6. Commentators will tell you various corrections in Jesus’ reading of that passage, but it's pretty trivial stuff.

Jesus’ real point is the big picture of David the Anointed Fugitive.  You must read the whole narrative of the Young David, I Samuel 16 to 26.

Throughout these chapters David has been secretly anointed by the Lord as the future king (I Samuel 16:1-13).  He and others throughout the stories refer very reverently to the “Lord’s anointed” – who must be protected and revered.

For example, in I Samuel 25:28-31 Abigail argues David out of shedding the blood of the "fool" Nabal:  "When the Lord [Yahweh] has done to my lord [David] according to all the good that he has spoken concerning you, and has appointed you prince over Israel, my lord shall have no cause of grief, or pangs of conscience, for having shed blood without cause..."

The David of I Samuel is the Lord of the future, secretly anointed, persecuted by the established authorities of his time (King Saul and his army), but who is marvelously protected both from his enemies and from engaging in behavior inappropriate for “the Lord’s anointed.”

That is who David was when he took holy bread from the sanctuary to feed his men – and that is who Jesus really is when his disciples eat grain on the sabbath.

Indeed, Jesus was Lord of the sabbath – and the Pharisees did not know that he was the New David, come again as the secret and persecuted “anointed of the Lord.”

Second Conflict:  Healing the man with the withered hand, 3:1-6. 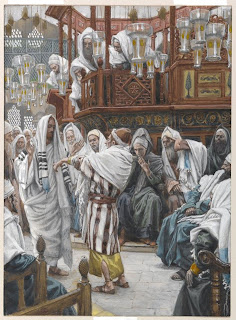 Here we have a very different approach to the violation of the sabbath.

This is a set-piece stand-off between Jesus and the Pharisee opponents.  Almost no details:  In the synagogue on a sabbath, a man with a withered hand, the opponents (“they”) watching expectantly for Jesus to violate the sabbath.  No discovery here:  this is a challenge and response.  Jesus knows their wicked thoughts, brings the disabled man to center stage, and makes a challenging speech.  Listen carefully to the extreme dimensions posed in the speech:

“Is it lawful to do good or to do harm on the sabbath, to save life or to kill?”

We have a withered hand before us, not a threat of death or terror.  The withered hand obviously could wait another day until it was not a sabbath.  Some issue much greater than simply the hand is on the table.  Jesus says the sabbath issue can be a matter of life and death.  We are not talking trivial oral-torah rulings about what is “work” on the sabbath (the Pharisees’ specialty).

What else?  After a sullen silence from the opponents, Jesus gets mad and – still knowing, without speech, where the opponents stand – “he was grieved at their hardness of heart.”  What does that remind you of?  Where have you heard of hardening of the heart?

How about Pharaoh and Moses in the Exodus story?  Here we are in another stand-off between the savior God sends and the powerful enemies who oppose and threaten him.

Jesus heals the withered hand – showing who he really is.  But the enemies know that the real issue is indeed one of life and death – and they act accordingly:

“The Pharisees went out and immediately conspired with the Herodians against him, how to destroy him” (verse 6).  This was indeed not simply an issue of a trivial sabbath rule!