On "Books," Scrolls, and "Malachi" 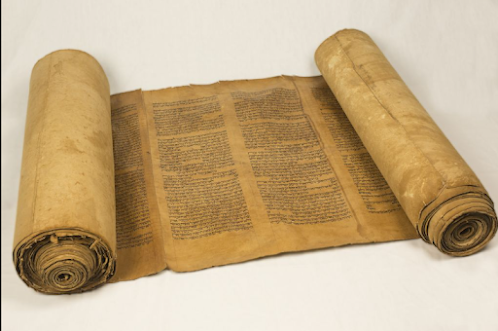 This was originally written as an extended note for a Lectionary reading in December, 2015.  It may be of some interest, however, to people who wonder how we got the various components of our traditional scriptures.

Modern Christians think of Malachi as the last book of the Old Testament, and so it is in printed Protestant Bibles.  In ancient times, however, there was no Bible – no single large “book” containing all or major parts of the scriptures.

(There’s a good reason you have never heard of “the Books.”)

The Judean scriptures in Hebrew occupied 22 to 24 separate scrolls, and in their Greek translations closer to 30 scrolls.  (The Torah was originally five scrolls; thus, the pentateuch, the five-scroll work.)  “The scriptures,” therefore, consisted of one or more large cabinets with pigeonholes.  Such cabinets (called capsa in Latin) contained the many scrolls scribes needed in their studies.

The only order of the “books” was by content:  the Exodus narrative followed the Genesis narrative, as you could discover by reading the two scrolls.  Scrolls like Psalms, Job, and Proverbs were shelved as the presiding scribe thought fit.  Prophetic scrolls were probably grouped vaguely by historical period of the prophet mainly involved.

Fixed order of scrolls was established in written form only after the invention of the codex, the “book.”

Christians adopted the codex (quires of pages fastened at the side – our “book”) around 200 CE.  The great advantage of the codex was that it could hold the contents of many scrolls.  The Christians first used it to combine all four Gospels into one "book," the Gospel.  (By the third century a separate codex, the Epistle, contained the New Testament "letters.")

[About the codex… ]  The … new book format appears initially to have had little success for Latin and Greek literary texts, for which the roll was used exclusively.  It appears to have been wholeheartedly accepted by Christians, however, so much so that the new religion… is often credited with establishing the codex as the standard format of the book, gradually supplanting the roll.  (Georgios Boudalis, The Codex and Crafts in Late Antiquity, City, 2018, p. 3.)

The first complete Bibles, containing both Old and New Testaments in Greek – huge works, very expensive [for example, codices Vaticanus and Sinaiticus] – were made by or for a few wealthy churches in Egypt and Syria beginning in the 4th century, a generation after Christianity became a legal religion in the Roman empire.   (Jews kept using scrolls for their scriptures until sometime in the early Middle Ages – and still use scrolls today for their Torah readings in Synagogue.)

How We Got Malachi.  In both Hebrew and Greek there was a separate big scroll called “the Scroll of the Twelve [Prophets].”  This scroll, about the size of the big Isaiah scroll found in the Dead Sea Scrolls, contained smaller collections of prophetic oracles from such as Hosea, Amos, Micah, etc., but also included a short story about a prophet – the story of Jonah.
At the end of this scroll there were three prophetic pamphlets, all beginning, “A burden:  the word of Yahweh to/concerning...”  Each pamphlet is headed by the Hebrew technical term “burden.”  This is the Hebrew word massā’, translated “burden” in the King James Version, but more recently as “oracle” (RSV, NRSV, ), “prophecy” (NIV 2011ed), “message” (NJB), or “pronouncement” (CEV).  The word literally means a load, something lifted, something picked up and carried, thus, metaphorically a message carried to someone else.  The word is so used many times in the scroll of Isaiah.
These three pamphlets headed “burden” followed the original collection of Zechariah oracles (Zechariah 1-8).  The first two pamphlets (now Zechariah 9-11 and Zechariah 12-14) came to be treated as continuations of Zechariah, though they are very different in content from Zechariah’s original prophecies.  Modern scholars call these first two pamphlets Deutero-Zechariah, the second “book” of Zechariah.

The third pamphlet had the heading, “Burden:  the word of Yahweh to by the hand of my messenger.”  “My messenger” in Hebrew is mal’ākî, which, after going through Greek and Latin, became “Malachi” in Modern English.

(The Greek translation of the heading of the pamphlet is, “Burden of the word of the Lord concerning by the hand of his angel.”  Greek angelos means “messenger,” but this Greek translation would have the prophet named “Malacho” [his messenger] rather than Malachi [my messenger].)

The heading of this third pamphlet, therefore, does not contain a proper name.  “My messenger” is a title, not a name – until later pious folks needed it to be a name.  It was then decided that this whole pamphlet was a separate prophecy by someone named Malachi.

This process of turning the title into a name probably happened when it was decided that the big scroll contained the writings of exactly TWELVE prophets.  The last pamphlet was peeled off to be the twelfth “book” of the scroll.  That probably happened sometime between 350 and 200 , between the old Hebrew version and the Greek translation.

Thus the “book” of Malachi is actually an anonymous pamphlet that was added to the other “minor” (that is, “small”) prophetic scrolls to make up the “twelve” someone had decided was the number needed.

This pamphlet has its own character and historical setting (a century or so after the exile), addressed to a time when the temple service had degenerated and some social evils (like divorce) had appeared.  Such conditions were present in Judah before the reforms of Ezra and Nehemiah, which began around 450 .