A Scholarly Legacy for half a century.
[Written in 2011.]  This is the first in a series of reviews of Study Bibles currently available. 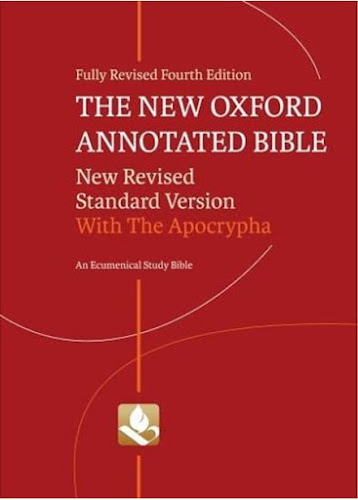 Outline of this Review
The Editions
The First and Second Editions (1962 and 1977)
The Editors and Contributors, 1st and 2nd editions
Third and Fourth Editions (2001 and 2010)
The Editors and Contributors, 3rd and 4th editions
Samples of NOAB Interpretations
On Sources in Genesis
On the Ten Commandments
On the Servant in Isaiah
On How to Read the Gospel According to Matthew
Comparison of Introductions to John, All Editions
On General Articles, 3rd and 4th editions
Some Evaluative Comments
Appendix:  Size of Print and Number of Pages


The Editions.
The OAB (and NOAB) has had four incarnations over almost fifty years, and has become virtually an institution.  Only two of the editions have been completely new, the first and the third, but the overall character of the work was set at the beginning.


[2nd ed.]  The New Annotated Bible with the Apocrypha.  An Ecumenical Study Bible.  RSV with 2nd ed of NT and Expanded ed. of the Apocrypha.  Edited by H.G. May and B.M. Metzger.  1977.  [An interim edition with only the Catholic Apocrypha, 1973, is omitted here.]

... The crucifixion narrative also displays this telescoping of perspective.  Responsibility for Jesus’ passion is shifted from Pontius Pilate and the Romans to the Jewish people and their leadership (27.20-25).  The horrific pronouncement “His blood be on us and on our children!” (27.25) is Matthew’s way of attributing the destruction of and the in 70 CE to ’s rejection of Jesus.  (Page 1747 in 4th ed.)

Appendix:   Size of Print and Number of Pages (“with Apocrypha” editions):


The 3rd ed. was printed in 9 point Times New Roman (or equivalent), a serif font.


The 4th ed. was printed in 7 point Arial (or equivalent), a sans serif font.


The Font change produced a 34% increase in print.
The total pages produced a 25% reduction in total content.
Thus, from 3rd ed. to 4th ed. there was approximately a 9% increase in printed content.
A personal estimate makes the weight of the paper in the trade edition of the 4th ed. slightly lighter than in the 3rd ed., making the pages a little more difficult to handle, as well as reducing their durability.