An Introduction to Paul’s Epistle to the Romans.

In the Revised Common Lectionary, Paul's Letter to the Romans is especially the Epistle for Year A (2017, 2020, etc.).  For twenty Sundays in that church year the Lectionary assigns readings from Romans.  This introduction is intended to orient hearers and readers to that challenging scriptural writing.
Outline of this Introduction:


A.  Romans is a famous and history-making Biblical book.
B.  Romans is a “Letter” with an  “Epistle” inside.
C.  The Epistle () is a series of “topics” that Paul often addressed.
D.  Statement of the Gospel.
1.  First Argument:  All have sinned.
2.  Second Argument:  Justification by faith.
3.  Example:  Abraham.
4.  Two Corollaries to Justification by Faith.
5.  Third Argument:  Freed from Sin and Death.
6.  A Special Case:  Dying to the Law.
7.  Conclusion:  Life in the Spirit.
:  Resisting but chosen.
F.  Consequences:  Instructions for living in mutual love.
G.  Benedictions and Greetings (chapter 16).
H.  Some Words about Commentaries. 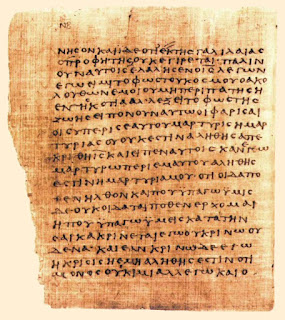 This picture shows a sheet of a papyrus manuscript.  Paul’s scribe would have written on a scroll, rather than a separate page like this.  However, this shows what scribal Greek looked like:  the writing is in capital letters with no punctuation or spaces between words.  Only a trained reader could recite it easily and smoothly.  ~~~~


The earliest surviving copy of Paul’s letters – collected long after his own time – is the papyrus codex P46, copied around 200 CE and containing major fragments of Romans 5-16.  The earliest complete copies of Romans are in the great parchment codices created by the newly-wealthy churches in , in the mid-to-late fourth century CE – such as Sinaiticus and Vaticanus.

1) Be modest, no matter which function in the life of the church (a body with many members) you perform – and we get a list:  prophet, minister [deacon], teacher, exhorter, fundraiser, leader, angel of mercy (12:7-8, NRSV modified).


2) Next we get a list of 21 attitudes and actions that should characterize their common life, starting with “Let love be genuine...” and ending with “...do not claim to be wiser than you are” (12:9-16).  If the hearers complied, this would be a pretty model community!


3) This chapter ends with a little topos on vengeance.  Leave revenge to God; you  should return good for evil.  That will make your persecutors feel miserable!  As for you, “Do not be overcome by evil, but overcome evil with good” (12:21).
·        The next chapter (13) concerns relatively public conduct by believers.


1) Obey the municipal and provincial authorities, whom God put there to prevent crimes.  Therefore, don’t commit crimes, pay your taxes, and keep the peace, 13:1-7.


2) Avoid debts – except the love you owe your neighbor.  The main items of the Ten Commandments – adultery, murder, theft, and coveting – are obeyed if you love your neighbor, 13:8-10.


3) In addressing personal morality and life-style, Paul gets a running start:  “You know what time it is...” It is still dark, but the dawn of the great Day is at hand.  “Let us then lay aside the works of darkness” – and he has a little list:  reveling, drunkenness, debauchery, licentiousness, quarreling, and jealousy (verse 13, NRSV).  “Instead, put on the Lord Jesus Christ, and make no provision for the flesh, to gratify its desires” (verse 14).


·        This part of the Epistle has one long discourse, 14:1-15:6.  It begins, “Welcome those who are weak in faith...” and it is about those who observe special dietary rules (like not eating meat) and sacred times (like Sabbath-keeping).  This is an example of a topos developed at considerable length.  The basic instruction (topic) is contained in 14:1-3:  “Those who eat must not despise those who abstain, and those who abstain must not pass judgment on those who eat; for God has welcomed them [both]” (verse 3).  Everything after that is exhortation and special pleading.  Commentators have concluded from the fact that 29 verses are devoted to this single subject that it was an important issue in the Roman churches.
·        This was an old topic for Paul.  Eight or nine years earlier he had been alienated from the church of Antioch over this issue, when Peter and Barnabas had stood against him (Galatians 2:11-14).  In his Asian and Greek churches Paul obviously kept fighting for congregations that did not discriminate against either strict (weak) constructionists or loose (strong) constructionists concerning older religious taboos.  Paul here dictated an impressive sermon in favor of tolerance among loving neighbors, with principles important for much later times.  However, in so far as this was an issue between Jewish Christians and non-Jewish Christians (as it is usually understood), this was not an issue specific to Roman Christians, whether this speech was deliberately addressed to them or not.
·        The final word of the Epistle is a reiteration, with abundant scripture proof, that God has sent good news to the peoples of the nations, 15:7-13.  Christ bridges both Jews and the nations:  “For I tell you that Christ has become a servant of the circumcised [Israel/Jews] on behalf of the truth of God [to fulfill God’s old promises] ... and in order that the nations [“Gentiles”] might glorify God for his mercy” (15:8-9, NRSV).
G.  Benedictions and Greetings:  Chapter 16.
H.  Conclusion.
There are many reasons why the Epistle to the Romans may be intimidating to an average reader of the Christian scriptures.
Nevertheless, Romans is undoubtedly most important because it declares in power and at length its central message that God accepts people by grace, giving them the chance to start new no matter what’s in their past.
Romans assumes, along with the rest of the New Testament, that the judgment of God is near at hand, and thus the central issue is where people stand in that judgment.  To be justified is to stand innocent before God as that judgment impends.  Romans further develops a few highlights of how “justified” people live, and from those hints, Christianity has developed an extended religious life (or several life options!).  But the foundational question is always, How do you stand before God?  “Thanks be to God through Jesus Christ our Lord” that the gospel of grace has been revealed!

Sanders, E.P.  Paul:  The Apostle's Life, Letters, and Thought, Fortress Press, 2015.  While this is not a commentary as such, it is an appropriate work to conclude this review.  Sanders was particularly responsible for the "New Perspective" on Paul that started in the 1970s, and this is a sweeping summary of where he has arrived forty years later.  As always, Sanders takes a rigorously historical approach to Paul, emphasizing, among other things, that Paul, in his letters, engages in arguments, and that the conclusions at which Paul thinks he has arrived are what is really important.  The consecutive arguments of Romans are analyzed and discussed on pages 615 to 705, the equivalent of a small-size commentary.